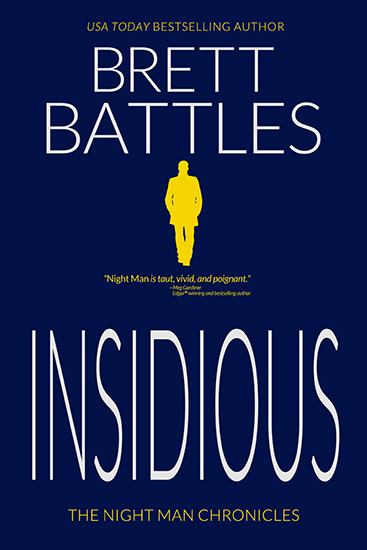 Book 2 of the Night Man Chronicles

It’s such a simple request that Nate doesn’t think twice about turning down the path Liz suggests. But when he finds the body, he realizes he should have known better. Liz has the habit of pointing him toward those who need his help, even if they are no longer living.

His deceased girlfriend isn’t the only one pushing him to solve the dead woman’s murder. After his best friend Jar discovers the woman’s true identity, she insists they need to investigate. Nate is not as sure. The police are on the case, after all, and if he and Jar intervene, they would only get in the way.

Bestselling author Brett Battles is that kid back in 6th grade who convinces his teacher that, as an assignment, everyone should write a short story that is at least 10 pages long. He received an A- on his project, while another student (name withheld) received an A+. Brett’s not bitter about this, nor does he ever think about the incident. Mostly.

Since that unfortunate injustice, Brett has written over thirty-five novels, a few novellas, and several short stories, and is a USA Today bestselling author (take that unnamed 6th grade classmate!).